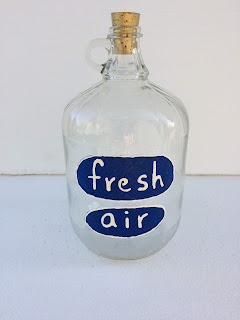 Fresh Air, a collaboration with Harry Mathews. Harry was deceased when I moved into his studio and home in San Diego in 2014 . I tried on a pair of glasses I found in his studio and they were my exact prescription. I became obsessed with finding out more and I discovered he was an oil painter but I never found any of his art in the studio or house. So, I started to collaborate with Harry and his spirit by making things with the items I discovered in his studio.
Posted by Don Porcella at 3:20 PM